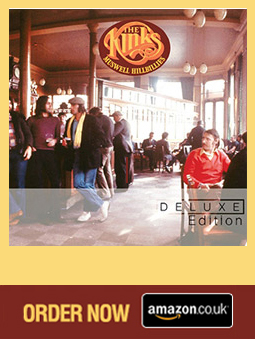 Originally released in November 1971, this classic Kinks album was the follow-up to the seminal ‘Lola vs Powerman’ album and the first with their new label RCA. The album was named after the Muswell Hill area of North London, where band leader Ray Davies and guitarist Dave Davies grew up and the band formed in the early 1960s. The album centres around themes of poverty and working-class life,  with a blend of American and British roots music veering effortlessly from rowdy blues and boozy vaudeville to the country sound of its title track and music-hall fuelled ‘Alcohol’.

Muswell Hillbillies is a great album, and ranks up amongst The Kinks’ best.

The Great News is that we are up and running for the Fan Club show at the Dome on 28th November, the band are Dave Clarke, Mick Avory, Mark Haley, Mike Steed (Bass) Debi & Shirlie plus The Oslo Brass, … END_OF_DOCUMENT_TOKEN_TO_BE_REPLACED

The Kinks are excited to announce that they will be premiering ‘The Moneygoround: A One Man Show For One Night Only’ at 8pm GMT on the 29th January on The Kinks Youtube channel. A one-off performance of the play co-written … END_OF_DOCUMENT_TOKEN_TO_BE_REPLACED