The Kinks are excited to announce that they will be premiering ‘The Moneygoround: A One Man Show For One Night Only’ at 8pm GMT on the 29th January on The Kinks Youtube channel.

The premiere will begin at 8pm GMT (29th January). Local times for which are:

Following last week’s [October 2020] announcement of the 50th anniversary re-issue of the classic Kinks album Lola Versus Powerman And The Moneygoround Part One, we are delighted to share with you the lyric video for brand new Ray Davies’ remix / medley ‘Any Time 2020’.

A concept album ahead of its time, Lola is a satirical appraisal of the music industry, including song publishers, unions, the press, accountants, business managers, and life on the road. One of the all time classic Kinks albums.

You can read the full article here.

This has now been cancelled. Due to ongoing restrictions and following further contact with The Dome, we regret that we have taken the decision to cancel this years event. All ticket money will be refunded and we will confirm a new date as things get back to normal.

We are now able to give some details and a date for the Official Kinks Fan Club Meeting this year.

We have had some delay on this as one of our principal players, John Dalton, has decided that he no longer wishes to play our meetings, although he will attend and support us. Plus I have been tied up with the terminal illness of my wife Julie.

As such, to tie in with best Band availability and also give traveling fans the option of the Sunny Afternoon Musical at the Wimbledon Theatre, we have booked The Boston Dome as follows-

When Glastonbury first held a music festival in 1970 I would only have been 9 years old so it’s no surprise that I wasn’t aware of it for a few years. However, by the time the 80s had come around it’s popularity was such that it had been added to my bucket list of “ambitions to achieve”.

My chance finally arrived June 26th 1993 courtesy of the Kinks. By that point I’d been with the guys 4 years during which we’d toured the US several times, all over Europe (including England) and the Phobia album had been launched.

As I recall it we were replacements for Crosby Stills & Nash who had pulled out late -just as the Kinks had done at the very first festival.

There was time for rehearsal and I stayed in the flat adjoining Konk studios sleeping on a pull out sofa that was actually more comfortable than the bed I had at home!

Bob, Jim and myself met up in the studio reception in the morning along with Lucy (Bob’s daughter).and it may surprise you we were chauffeured all the way from North London down to Glastonbury on the day we were to perform. A trip that takes so long we had two drivers sharing the work load. More of them later. 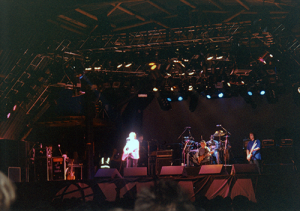 Fast rewinding back to 1989 when I was first introduced to Bob I recalled his very first words to me. Not “Hello” or “pleased to meet you”. Nope. Bob held my outstretched hand in a steely grip and said “Stay away from daughter” through gritted grinning teeth.

Fast forward again to June 26th 1993 and I enjoyed the company of Bob directly opposite watching me like a hawk for over 4 hours.

On arrival I was relieved to see the weather had been kind and the backstage area was free of the mud that occasionally engulfs the festival. I’d love to say I still had a backstage pass but on the day it was one of those annoying wrist band things (similar to what you have in hospitals) which I ripped off as soon as possible.

The road crew quickly found us and that was when I learned that Lenny Kravitz (the headliner) was refusing to go on last as planned.. I’ve heard since that he’d stepped back from headlining out of deference to the Kinks. Not so. Lenny didn’t want to follow us! He needn’t have been concerned. If Glastonbury had a roof he would’ve torn it off. Kravitz had struck gold earlier that year with ‘Are You Gonna Go My Way’ and went over fantastic on the Pyramid Stage.

The clearest memory I have that day was the crowd carried on singing his closing number ‘Let Love Rule’ while our road crew reset the stage. 20 minutes later I went on stage just to test my keyboards and they were still singing ” Leeeeee-et L0000000-ove Ruuuuuuuuuu-ule”. Now we had to follow him!

Bill Orton was part of the crowd at Glastonbury that day and I’m grateful to him for making a copy of the set list we performed. (See below)  Ray was never afraid to give less familiar songs an airing, confident in the knowledge that he has Lola and friends to pull out of a hat when required. Even so I was surprised to see we played ‘Drift Away’.

The set was well received even though the encore included a couple of songs the audience wouldn’t have been hugely familiar with: ‘Aggravation’ and ‘Hatred’ and there was even time to squeeze in an unrehearsed blast of ‘Twist & Shout’. It had been a great experience which unfortunately wasn’t filmed. Any pictures here were taken by Bill.

Finally it was time to head home. A journey that somehow took an extra hour or so longer. The reason? One of the driver’s had decided he wanted to be dropped off first over in the East End of London… Thank you very much! I ended up back at Konk in the extremely early hours and crawled back into the most comfortable sofa bed in the world.

lastonbury was a good show and there was certainly a high level of crowd excitement as the band hit the stage, I nearly missed the Kinks as at that time you could buy a day ticket and the Kinks were booked for the Sunday, but Red Hot Chilli Peppers pulled out and at a late stage the Kinks were switched to the Saturday night!

A new book has been released by Mark Doyle covering a social study around the songs of Ray Davies and The Kinks. The SHINDIG review says it all.

A completely different look at Kinks history from the usual type of book, you could say that this book has been waiting to be written for a long time.

‘As a piece of rock criticism this is a masterful text, and as an examination of social change in 20th Century Blighty, it is as illuminating as it’s possible to get.

Doyle unravels the Kinks’ relationship to working class England in a variety of ways, casting a light on Ray Davies’ genius for creating immediately identifiable characters as vehicles for social commentary. Doyle’s insights into the subject matter of Davies’ lyrics are particularly illuminating, with the deliberate ambiguity of meaning in his composition a vital factor in their enduring appeal.

That half-smile may have lent a clue, but Davies’ veering between sneering hipster and Victorian Romantic meant that one was never sure that all was what it seemed.

Davies’ own love affair with London and its people is brought to life through the author’s exhaustive research and his commensurate skill in both contextualising the songs and celebrating the “apartness” of their creator. A compelling read for anyone even remotely interested in the band and its music.’ – Shindig 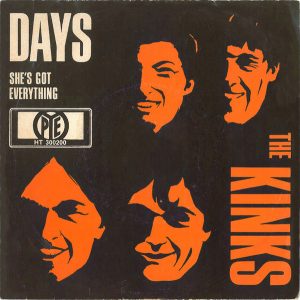 Do you have a special memory connected to The Kinks ‘Days’? Does it remind you of a significant time in your life or a special person? Has it touched your life in some way? If so Radio 4 would love to hear from you.

We are looking for personal stories that celebrate this song or speak of times that it has bought comfort or inspiration. If you have something you’d like to share please contact nicola.humphries@bbc.co.uk.

I’m looking to make contact with people over the next few weeks with a view to recording any interviews that might work for the programme before December. Thank you.

Ian Gibbons sadly passed away on Thursday, 1st August 2019. Ian was due to have treatment for bladder cancer but contracted a virus and was unable to undergo surgery. Our thoughts are with Ian’s wife Nadia and all of his family and friends.

Ian joined The Kinks in July 1979 and immediately started the USA touring for the Low Budget album, which became the highest-charting (USA) and first Gold album with all new material. Ian left the band in 1989 rejoining in 1993 for the final “To The Bone” tour period.

Ian also worked with Roger Chapman, and Ian Hunter, before rejoining Ray Davies, touring and contributing to the successful, Kinks Choral project (including main stage at Glastonbury) and tracks for Ray’s Americana album, which Ian told me was the best time he had spent with Ray in the studio, as Ray had everything worked out and knew exactly what he wanted!

Ian was an integral part of Kast Off Kinks, and will be greatly missed by all.

Due to the sad loss of Ian Gibbons, it will not be the usual full performance by Kast off Kinks, Pete Watkins had already been asked to be involved performing tracks from “Arthur”, and other members of the band will be looking at how they can put something together for the Fan Club, we will update you as and when we have further details

We are not intending to cancel the show.

The Kinks are excited to announce that they will be premiering ‘The Moneygoround: A One Man Show For One Night Only’ at 8pm GMT on the 29th January on The Kinks Youtube channel. A one-off performance of the play co-written … END_OF_DOCUMENT_TOKEN_TO_BE_REPLACED

Following last week’s [October 2020] announcement of the 50th anniversary re-issue of the classic Kinks album Lola Versus Powerman And The Moneygoround Part One, we are delighted to share with you the lyric video for brand new Ray Davies’ remix / medley … END_OF_DOCUMENT_TOKEN_TO_BE_REPLACED