The current Fan Club team have been active now for more than 20 years and it may surprise some fans that the club has direct links to the original fan club formed in March 1964.

The Kinks’ initial success came before the days of global marketing and merchandising and, although the Kinks were working a global market with record sales, there was no ‘industry’ backup for fan clubs or other areas of promotion.

There has only ever been one Official UK fan club throughout the group and solo careers. Worldwide, strong Kinks fan clubs and followings emerged across Europe and, in particular, several in the USA. 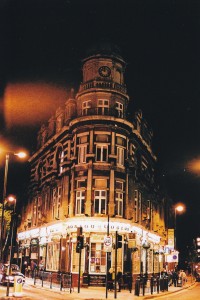 It is, perhaps, surprising that the US fan clubs all folded as, certainly in the 1970s through to the late 1980s, North America was the group’s strongest market sales-wise and the focus for the majority of touring activity and record company promotion & marketing.

It is ironic that we took over the fan club in 1996, as it proved to be the last year of any live Kinks performances, but it has proved an interesting time with extensive touring from Ray Davies and, until recent illness, Dave Davies, and some really enjoyable shows with Kast Off Kinks.

Our fan club meetings in London – initially at The Archway Tavern and over the last five years at The Boston Arms (see picture, left) – have raised over £25,000 for Leukemia Research.

So, it’s not quite the end of the road yet and, good health permitting, we ‘still have a way to go’.

The Great News is that we are up and running for the Fan Club show at the Dome on 28th November, the band are Dave Clarke, Mick Avory, Mark Haley, Mike Steed (Bass) Debi & Shirlie plus The Oslo Brass, … END_OF_DOCUMENT_TOKEN_TO_BE_REPLACED

The Kinks are excited to announce that they will be premiering ‘The Moneygoround: A One Man Show For One Night Only’ at 8pm GMT on the 29th January on The Kinks Youtube channel. A one-off performance of the play co-written … END_OF_DOCUMENT_TOKEN_TO_BE_REPLACED