The Great News is that we are up and running for the Fan Club show at the Dome on 28th November, the band are Dave Clarke, Mick Avory, Mark Haley, Mike Steed (Bass) Debi & Shirlie plus The Oslo Brass, … END_OF_DOCUMENT_TOKEN_TO_BE_REPLACED

The Kinks are excited to announce that they will be premiering ‘The Moneygoround: A One Man Show For One Night Only’ at 8pm GMT on the 29th January on The Kinks Youtube channel. A one-off performance of the play co-written … END_OF_DOCUMENT_TOKEN_TO_BE_REPLACED

Following last week’s [October 2020] announcement of the 50th anniversary re-issue of the classic Kinks album Lola Versus Powerman And The Moneygoround Part One, we are delighted to share with you the lyric video for brand new Ray Davies’ remix / medley … END_OF_DOCUMENT_TOKEN_TO_BE_REPLACED

Cancelled This has now been cancelled. Due to ongoing restrictions and following further contact with The Dome, we regret that we have taken the decision to cancel this years event. All ticket money will be refunded and we will confirm … END_OF_DOCUMENT_TOKEN_TO_BE_REPLACED

When Glastonbury first held a music festival in 1970 I would only have been 9 years old so it’s no surprise that I wasn’t aware of it for a few years. However, by the time the 80s had come around … END_OF_DOCUMENT_TOKEN_TO_BE_REPLACED 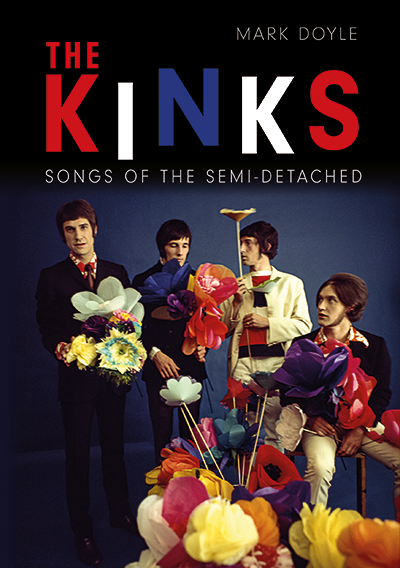 A new book has been released by Mark Doyle covering a social study around the songs of Ray Davies and The Kinks. The SHINDIG review says it all.

A completely different look at Kinks history from the usual type of book, you could say that this book has been waiting to be written for a long time.

‘As a piece of rock criticism this is a masterful text, and as an examination of social change in 20th Century Blighty, it is as illuminating as it’s possible to get.

Doyle unravels the Kinks’ relationship to working class England in a variety of ways, casting a light on Ray Davies’ genius for creating immediately identifiable characters as vehicles for social commentary. Doyle’s insights into the subject matter of Davies’ lyrics are particularly illuminating, with the deliberate ambiguity of meaning in his composition a vital factor in their enduring appeal.

That half-smile may have lent a clue, but Davies’ veering between sneering hipster and Victorian Romantic meant that one was never sure that all was what it seemed.

Davies’ own love affair with London and its people is brought to life through the author’s exhaustive research and his commensurate skill in both contextualising the songs and celebrating the “apartness” of their creator. A compelling read for anyone even remotely interested in the band and its music.’ – Shindig

Do you have a special memory connected to The Kinks ‘Days’? Does it remind you of a significant time in your life or a special person? Has it touched your life in some way? If so Radio 4 would love … END_OF_DOCUMENT_TOKEN_TO_BE_REPLACED

It came as a huge shock (for everybody I would imagine) to receive the news of Ian’s passing last Friday. I’d been following the Kast Off’s increasingly successful exploits for a few years and saw they’d done a gig only … END_OF_DOCUMENT_TOKEN_TO_BE_REPLACED

Ian Gibbons sadly passed away on Thursday, 1st August 2019. Ian was due to have treatment for bladder cancer but contracted a virus and was unable to undergo surgery. Our thoughts are with Ian’s wife Nadia and all of his … END_OF_DOCUMENT_TOKEN_TO_BE_REPLACED

Due to the sad loss of Ian Gibbons, it will not be the usual full performance by Kast off Kinks, Pete Watkins had already been asked to be involved performing tracks from “Arthur”, and other members of the band will be looking at how they can put something together for the Fan Club, we will update you as and when we have further details

We are not intending to cancel the show.